All Alone With a Microphone 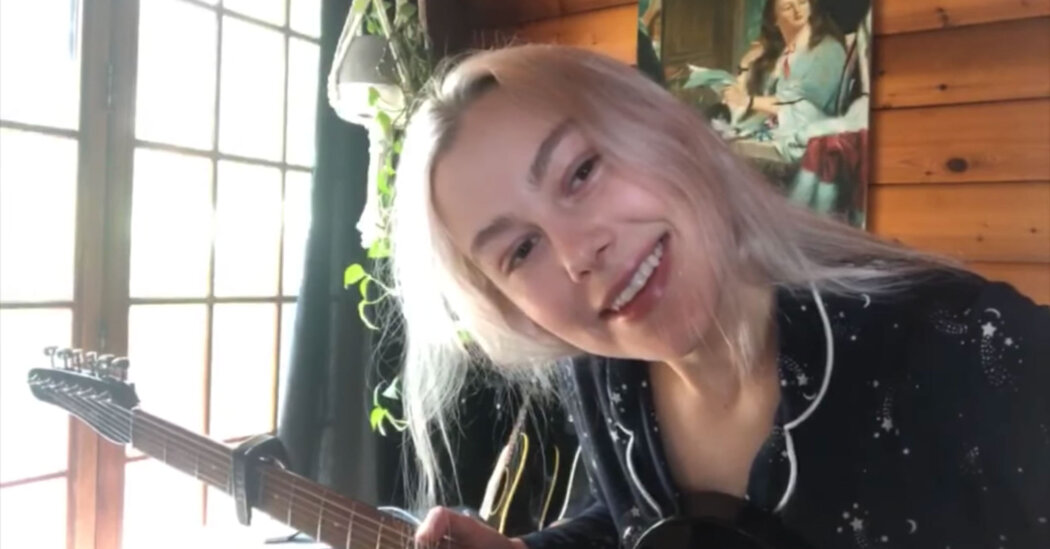 The last time I applauded live music with a room full of strangers was sometime in February. Applause was an inconspicuous reflex: the punctuation between one song and the next, a wordless expression of approval that cleared the air for the next organized vibrations. In decades of playing I had often heard applause as a distraction, just noises that interrupted the musical experience. But during those long months of pandemic I realized that applause really is a connection: listeners communicating with performers, listeners communicating with each other, and sometimes musicians applauding what they have just done together, with the audience as witnesses and co-conspirators .

I took it for granted. But by 2020 so much of what listeners and musicians had taken for granted disappeared – including the touring of musicians and all of the people who worked for and because of them, all of their livelihoods. The theaters grew dark; historical clubs closed, some forever. Known and unknown musicians died from Covid-19.

There were no more (safe) concerts, no more physical communities, no more offline connections, no more chance encounters with other fans. For those who took public health guidelines seriously, making music together was severely restricted. Indoor rehearsals, studio hangouts, jam sessions, dance parties, and personal collaborations disappeared. At best, they reappeared with all the old acoustic cues: musicians performing intermittently, outdoors, or connected online.

It wasn’t just the applause that fell silent. All of the real-time feedback loops of the music did this. The instinctive, intuitive things that musicians learn non-verbally while practicing or improvising together, and the signals they receive from a concert audience, have been switched off. No amount of video conferencing, chat scrolling, or drive-in concert horn honking could compensate for this. When it disappeared, we learned how very simple physical closeness affects the music.

Artists coped with it. They didn’t go anywhere even during the lockdown. With the tour dates gone, many made music at home. Some – Norah Jones, Phoebe Bridgers, Jorma Kaukonen – appeared online often, keeping their voices and fingers limber, looking for connections with fans who could no longer see them. Some confiscated themselves to work independently, then revealed unexpected projects recorded at home and completed via file sharing: such as Charli XCX’s open, self-recorded and hectic meta-poppy “How I’m Feeling Now” and two full albums by Taylor Swift, “Folklore” and “Evermore,” along with a flawless, seized living room performance, “The Long Pond Studio Sessions,” which Swift and her main staff physically united for the first time.

Long before 2020, musicians had constructed tracks virtually and over long distances rather than through face-to-face interaction, especially in relation to hip-hop, electronic dance music and what is known as bedroom pop. But the pandemic has brought isolated work – alone, perhaps as a family unit or via the internet – closer to universality. (There was a considerable learning curve when musicians became their own sound engineers.) Musicians also processed their changed routines and the same emotions as everyone else in 2020: fear, loneliness, boredom, claustrophobia, agoraphobia, doubt, suspicion and at the same time the political protest Furies of the 2020 elections and the nationwide protests against Black Lives Matter.

The social expectations of music have been unraveled and atomized. The immediate reactions of the collaborating musical staff – a raised eyebrow, a wobbling head, an involuntary grin – gave way to video latency at best and ignorance at worst. The mere presence of an audience provides subliminal cues for editing, but the audience was far away and most likely distracted. Musicians who envision real spaces for their music – arena, dance floor, rock club, car – could no longer rely on an obvious physical destination for their work that went beyond the computer screens that had become everyone’s main connection.

Lifelong reflexes had to change. It wasn’t all bad. Musical collaborations can be spontaneous and synergistic, but they can also lead to a mindset of the committee for reflection and convention. The need to work alone allowed the musicians to be quirkier, less inhibited, quirky, and daring. Many of my favorite 2020 albums – by Sufjan Stevens, Moses Sumney, Georgia Anne Muldrow, Swift, and pre-pandemic recluse Fiona Apple – share the spirit of reckless introspection and make the most of the forced breakup by digging deep into personal obsessions.

Lockdowns and working from home have also greatly influenced everyone’s sense of time – and time, like sound, is the raw material of music. While musicians had unexpected and undesirable time off-road to write, record, and practice, listeners who turned to streams for entertainment were able to stream entire albums and record structures that were more expansive than a song in the middle of a playlist. Isolation offered an opportunity for contemplation. This in turn encouraged the musicians to make bigger statements.

The performers’ urge to perform – which goes well beyond trying to maintain a source of income – led to months of experimentation and new forms of self-disclosure while accelerating the pressure on musicians to master social media. Online there were unfiltered visits to houses and home studios that opened the doors to formerly private rooms – sometimes entertaining, sometimes cumbersome.

As the months went on, the performers found more venues and variations: virtual backdrops, multi-track videos, studios, parks, and even their famous clubs and concert halls. They were empty, but reopened for a moment to take a wistful look at what used to be normal.

But 2020 could have changed normally forever. It drifted musicians apart, internally and online; it considered how to make and present music. Bilal, a Philadelphia songwriter and singer who worked with D’Angelos Soulquarians, set up a three-day virtual songwriting / jamming session in August: a 54-hour livestream with 30 guest musicians checking in online, including Erykah Badu and Robert Glasper, overseen by producer Tariq Khan. The livestream was, for the most part, the numbly boring but essential work of a recording session. But the result was a pulsating, changeable, jazz-R&B-soul electronic EP with three songs that is an essential document of the days of quarantine and street protests: “Six feet between us or six feet between us,” it says Rap.

Some musicians, promising adequate testing and precautionary measures, gathered ensembles of flesh, blood and sweat for worldwide streams. Dua Lipa’s album “Future Nostalgia,” which was recorded before the pandemic but released in March, was a disco and house-loving collection of songs clearly intended for dancing crowds. That couldn’t happen in 2020.

Long in quarantine, Lipa staged “Studio 2054” in October, a live stream with a band, a DJ and dancers. She was set up perfectly and apparently worked live in front of the cameras. She cavorted together with guests – Kylie Minogue, FKA branches, the Blessed Madonna – in a neon-lit simulated disco on a sound stage and defied the actual proximity. A year ago, “Studio 2054” would have been a challenge for an arena tour. Now it was playing out as a fantasy of an alternate reality in which people could freely blend in and feel the beat together. It demanded 5 million viewers.

With luck, 2020 will be a distant outlier: a single year of devastation and separation. Yet amid all the sadness, anger, ugliness, and loss, it also showed us possibilities to remember.