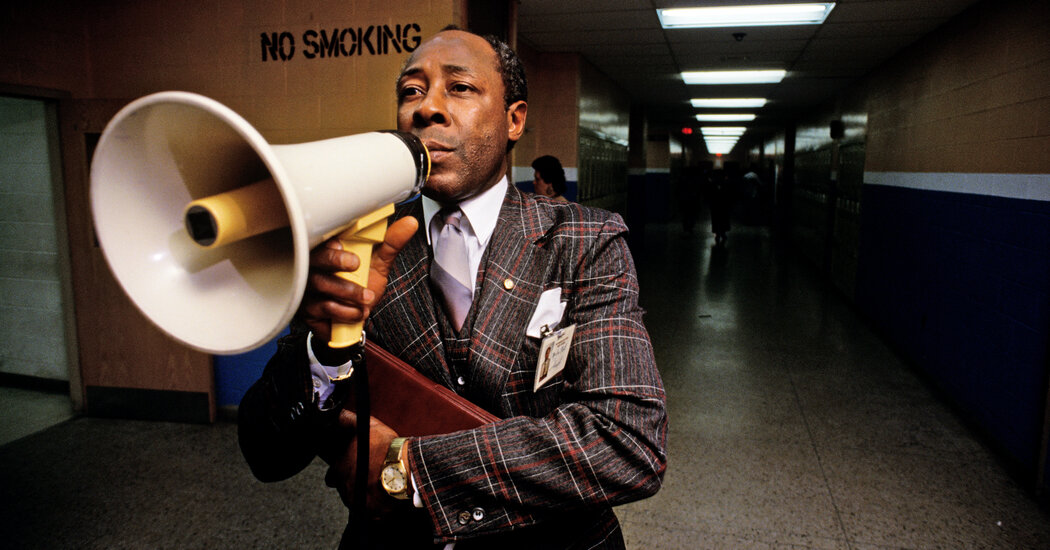 Joe Clark, the commanding discipline chief of a troubled New Jersey high school in the 1980s who became famous for restoring order by prowling the hallways with a megaphone and sometimes a baseball bat, died Tuesday at his home in Gainesville, Florida 82.

His family announced his death but did not give a cause.

When Mr. Clark, a former Army Sergeant, arrived at Eastside High School in Paterson in 1982, he declared it a “cauldron of violence.” In his first week, he expelled 300 students for disciplinary problems.

When he kicked out about 60 other students five years later – “outcast” as he put it – he called them “leeches, villains and crooks.” (This second round of suspension caused the Paterson School Board to file insubordination charges, which were later dropped.)

Mr. Clark managed to restore order, instill pride in many students, and improve some test scores. He was commended by President Ronald Reagan and Reagan’s Secretary of Education William J. Bennett. When Morgan Freeman portrayed him, he was immortalized in the 1989 film “Lean on Me”. And his hard love policy got him on the cover of Time magazine in 1988, holding his bat in hand. “Is the answer getting hard?” the headline read. “Headmaster Joe Clark says yes – and critics are in the arms.”

Mr. Clark, who oversaw a poor, mostly black, Hispanic student body, denounced positive action and welfare policies and “hocus-pocus liberals”. When “60 Minutes” profiled him in 1988, he told correspondent Harry Reasoner: “Because we were slaves, that doesn’t mean you have to be crooks and thugs and hit people in the head and rob and rape people. No, I can’t accept that. And I don’t make alibis for black people anymore. I just say work hard for what you want. “

In order to gain control of a criminal school, Mr. Clark introduced automatic suspensions for assault, drug possession, fighting, vandalism and profanity against teachers. He hired students to do schoolwork for minor offenses such as being late and interrupting classes. The names of the perpetrators were announced through the public address system.

And in 1986, to prevent the thugs from entering the school, he ordered the entrance doors to be locked with a padlock during school hours. The fire brigade responded by removing the locks and pointing out the safety of students and teachers. A year later, the city cited him for contempt for keeping the doors chained.

“Instead of getting applause and purple hearts for a school resurgence,” said Mr. Clark after a trial, “some moronic creeps slander you.”

Although the Padlock episode brought him into conflict with the Paterson School Board, his no-nonsense style led to an interview for a White House job in early 1988. Before turning it down, he insisted it wouldn’t be because if he accepted the job, any print from the board.

“I refuse to let a group of stubborn, rebellious board members drive me out of this city where I’ve worked so diligently for 27 years,” he told the Washington Post in 1988. A headline in the Post called him “The Wyatt Earp of” Eastside High. “

Joe Louis Clark was born in Rochelle, Georgia, on May 8, 1938, and moved to Newark with his family when he was 6 years old. He earned a bachelor’s degree from what is now William Paterson University in Wayne, New Jersey, and earned his Masters degree from Seton Hall.

After serving as a drill instructor in the Army Reserve, he began his training career as an elementary school teacher and principal in New Jersey and then as director of camps and playgrounds for Essex County, New Jersey. Then he was appointed to turn around Eastside High.

“A school goes where the headmaster goes,” said William Pascrell, president of the Paterson School Board, of North Jersey’s The Record newspaper. “Eastside is a school ready to take off. Joe Clark is the guy who can do it. “

In 1989, his senior year at Eastside, Mr. Clark spent some time out of school promoting Lean on Me and was out and about when a group of young men stripped their g-strings during a school meeting. Mr. Clark was suspended for a week for not overseeing the meeting.

He resigned in July 1989, two months after Eastside heart surgery.

After six years in the lecture series, often demanding rigorous academic standards, Mr. Clark reappeared as director of Essex County’s Newark Prison. Again his tactics drew fire. Both the New Jersey Juvenile Justice Commission and the state Department of Youth and Family Services criticized him at different times for excessive use of physical restraints, including handcuffing and cuffing some inmates for two days.

Mr. Clark resigned as director in early 2002 after the Juvenile Justice Commission accused him of long-term isolation of teenagers.

His survivors include his daughters, Joetta Clark Diggs and Hazel Clark, who were both middle-distance Olympic runners. one son, JJ, the director of athletics at Stanford University; and three grandchildren.

Mr. Clark’s image was dramatically reinterpreted at the height of “Lean on Me”. As Mr. Clark, Mr. Freeman is sent to jail for violating fire safety regulations, only to convince students who gather for his release to disperse. (He is released by the mayor in the film.)

“Well, if he really hadn’t taken the chains off the doors,” Avildsen told The Times in 1989, speaking of Mr. Clark, “and if he had gone to jail then what happened in the film could be great . ” Well it happened. “