Shakespeare, Swing and Louis Armstrong. So What Went Wrong? 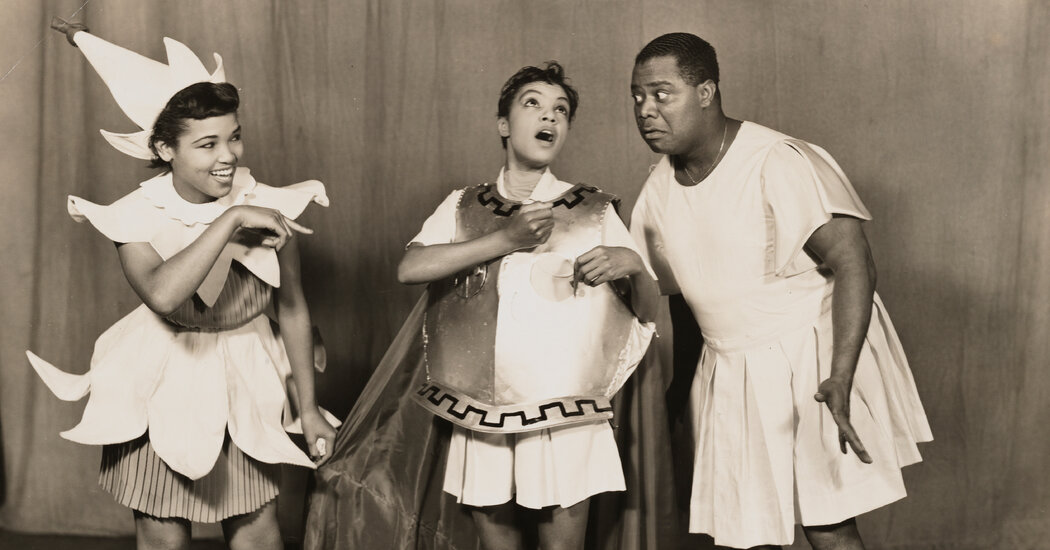 “It’s almost like some kind of crime thriller,” said Kwame Kwei-Armah with apparent pleasure. “The piece was butchered by the press and somehow the body disappeared.”

The case referred to by the Artistic Director of London’s Young Vic Theater is a Broadway show called “Swingin ‘the Dream”. This “musical variation of Shakespeare’s” A Midsummer Night’s Dream “, as it was billed, was set in Louisiana in 1890 and ran on Broadway for only 13 performances at the end of 1939 and was then sunk without a trace. The script itself is lost, except for a few pages from the Pyramus and Thisbe sections.

So one has to wonder why prominent institutions – the Royal Shakespeare Company and the Young Vic in the UK and the New York Theater for New Audiences – would band together to reconsider a footnote on a long-term project that begins Jan. 9 a livestream concert of popular jazz tunes that included the score.

Once you start digging, however, you have to wonder how not to be drawn to “Swingin ‘the Dream” which is at the center of an intricate network of racial and cultural influences.

Let’s start with an integrated cast of about 110 – you read that right – that had Louis Armstrong as the bottom; Butterfly McQueen and Oscar Polk, fresh from the set “Gone with the Wind”, as puck and flute; the comedian Moms Mabley as a quince; the singer Maxine Sullivan as Titania; and future Oscar nominee Dorothy Dandridge as an elf. The Benny Goodman Sextet and Bud Freeman’s Summa Cum Laude Orchestra completed the pit musicians. (According to Ricky Riccardi’s most recent book, Heart Full of Rhythm, Armstrong and Goodman argued over who would get the highest bill and ended up sharing it equally.)

And there was more: Agnes de Mille took care of the choreography; The sets were inspired by Walt Disney cartoons. and the score burst with popular jazz melodies as well as new ones like “Darn That Dream” by Jimmy Van Heusen and Eddie de Lange.

However, this abundance of talent did not guarantee success. The reviews were mixed at best and didn’t help fill the 3,500 seats at the Center Theater – even with the top ticket price dropped to $ 2.

The show was quickly forgotten, although “Darn That Dream” has become a concert favorite, sung by Billie Holiday and Nancy Wilson, among others.

It will be part of the concert, which includes a cast of RSC ensemble members and jazz performer Zara McFarlane.

“‘Darn that Dream’ is a really important jazz standard that I play and with which I accompany people. It was really surprising not to know its roots in a very important production that they put so much money into”, said Peter Edwards, the concert’s music director, who didn’t hear about “Swingin ‘the Dream” when the RSC contacted him.

The project was launched long before the pandemic and the directors of the three theaters are unsure of what it will be like this weekend after the concert. However, a complete remount of the show sounds less likely than a forensic dive – think “CSI: Times Square”. The George C. Wolfe meta show “Shuffle Along or Making of the Musical Sensation from 1921 and All That Followed,” which had a short but acclaimed Broadway run in 2016, could provide a possible direction.

“I just want to know what happened, why this cast crashes, and then why the show seems to go so completely,” said Gregory Doran, artistic director of the Royal Shakespeare Company.

At the time, black newspapers were among those shared on the show. An article in The Pittsburgh Courier praised a “powerful blend of music, serenity, and gentle reflection”; Another pointed out the many employment opportunities for black artists.

The New York Amsterdam News, on the other hand, wondered if promoting a below-average effort would only delay the day when Negro actors and Negro art are recognized without ridicule and burlesque.

“The critics tell us that it didn’t hold together, that the mash-up didn’t work,” said Kwei-Armah. “I’m interested in why it didn’t work. Just because they said it didn’t work doesn’t mean it didn’t! “

The locomotive that pulled the train and its many, many cars was Erik Charell, a gay, Jewish director and producer of revues who had relocated to the United States after fleeing Nazi Germany and was a fascinating character himself. His Broadway directorial debut in 1936 was an adaptation of his successful Berlin operetta “White Horse Inn” with 145 actors – no wonder that he was nicknamed “Ziegfeld of the German musical comedy stage”.

Charell may have wanted to capitalize on the success of “The Swing Mikado” (1938) and “The Hot Mikado” (1939), two jazz-flavored adaptations of the operettas Gilbert and Sullivan, but he wasn’t quite ready for the delicate subjects and challenges that came through an integrated show in America before World War II.

“Obviously he’s the man of the moment, he has the Midas touch,” said Doran of Charell. “But is what he’s doing an exploitation of that talent or a visionary mindset?”

Because, as a preview in The New York Times put it, Charell was “a stranger to our mother tongue,” and co-wrote the American critic Gilbert Seldes, an early advocate of popular culture.

For Jeffrey Horowitz, the founding artist of Theater for New Audiences, it was a big missed opportunity not to bring in a black co-writer. “There isn’t a person on this writing team who knows anything about African American culture and jazz,” he said. “You could have had Langston Hughes, you could have had Zora Neale Hurston. I don’t think they thought of that. “

The racial and artistic dynamics in “Swingin ‘the Dream” provides valuable insight into the everyday misunderstandings and problems that shaped American culture in the early 20th century. For example, the white cast played the aristocrats and lovers, while the black cast handled the fairies and mechanics – comic entertainers, not romantic leads.

Another fascinating juxtaposition took place with dancing, as de Mille’s choreography was complemented by jitterbugs developed by the ballroom of the King of Harlem, Herbert White, who brought his troupe with him.

Most of the reviews complained that there was too much Shakespeare and too little swing, with Armstrong being wasted in a role where he didn’t have to blow his horn. The producers desperately tried to adapt, eventually giving their star more time on the trumpet. Unfortunately nothing worked and “Swingin ‘the Dream” was closed.

Now all that remains is a seductive riddle, the making-of story of which has become more compelling than the final product.

“Even if the script came up tomorrow, we wouldn’t be interested,” said Horowitz. “It’s really about something else – it’s about race and context and who’s telling whose story.”